A community vision for La Comuna 8

On the steep green slopes of La Comuna 8, situated above Medellín’s bustling city centre, live thousands of the victims of Colombia’s internal armed conflict. Faced by violence from state and non-state armed actors across the fertile and mountainous region during the past 30 years, families of farmers and fisherman, shopkeepers and schoolteachers fled to Medellín. Often with next to nothing and in the absence of government provision, these internally displaced migrants acquired plots of land and – together with their new neighbours – organised and built homes, aqueducts, roads and bus services. Together they built their communities that today sit cheerfully above Colombia’s second city.

The evolution of these neighbourhoods was however far from simple; for many families the violence they fled from has continued. The practical absence of state and institutional presence exposed these communities to the forces of powerful gangs that in 1980s and 1990s fought for territory in the city that had become the centre of the developing global cocaine trade. Poor education provision and a lack of employment opportunities made men and boys easy targets for gangs offering wealth and status. Though the notorious La Sierra documentary offers a greatly exaggerated account (not least through the manipulation of sequence and location), the events portrayed were real and pertain to the reality faced in the sector.

More recently, gang violence has decreased greatly across the city and in La Comuna 8, as a result of concerted government action to battle the narcotics trade and, significantly, a recent pacto fusil between Medellín’s principal armed gangs. The collective spirit and action that built these neighbourhoods then held them together through conflict, has since flourished in the bright, breezy barrios of El Pacifico, Esfuerzo de Paz, Llanaditas and their neighbours. Juan David, attests to the transformed reality in his neighbourhood – “La Sierra, well, it’s very nice. It’s the best. It’s my home.”

In the context of recent stability progress, the communities on the upper banks of La Comuna 8 are now facing their greatest existential threat, from the city’s land development plan, the Plan de Ordenamiento Territorial. Expropriation of community territory combined with eviction and dispossession lie in the near future for thousands of these families. Classified as zonas de riesgo or beyond the urban perimeter, these decades old communities are facing near absolute removal. And whilst safety and sustainability arguments have supported the depoliticization of this displacement, the relationship between this project and the increasing value of land is hard to ignore.

These plans, formulated by the current administration and approved by city councillors in October 2014, were created amidst notable disinformation and in the face of great opposition. Today they are being executed with guise and obfuscation. In heralding plans as ‘procesos de construcción colectivas’, the Empesa de Desarrollo Urbano (EDU, or the ‘Empresa de Desplazamiento Urbano’, as known by some) – the government’s private partner delivering this project – have more than stretched the truth. In Barrio Pinares de Oriente EDU held just one planning meeting, in which 34 people attended; 10 adults, 5 adolescents and 19 children. And the ‘construcción colectiva’ in Barrio Villatina La Piedra also warranted just a solitary meeting, this time attended by 11 adults, 3 adolescents and 8 children. The scope of this consultation and participation leaves much to be desired in neighbourhoods of hundreds of families.

EDU have presented their plans as the solution for communities living on inherently risky mountainside slopes. Yet when pressed for the evidence supporting these claims – the geological studies of risk – EDU have remained silent. It is as if they haven’t conducted the studies! Or that if they have, the studies show the mountain doesn’t contain grave geological faults (and, crucially, that any risk to communities could be managed and mitigated). If the mountain does contain structural faults, surely EDU wouldn’t be planning to build new apartment blocks, a metro cable, and a monorail? In fact the subject of risk has been utilised to make the expropriation of homes cheaper and quicker. Those homes located in ‘zonas de riesgo’ are not eligible for legalisation by the proprietors, even those that have been resident for up to 20 years. These ‘zonas de riesgo’ have been extended to the banks of streams and springs, where many homes are located. Too risky, say EDU, to be within 15 metres of these streams, even those streams that have long since dried up, like the Quebrada La Rafita in Barrio El Pacifico.

The risk, it seems to this observer, is not of floods or earthquakes. The risk is that families will lose their homes View of Medellín from the community allotments of Barrio Pinares de Oriente without compensation, and will lose the support networks that have enabled their families to flourish. The risk is that these victims of displacement in Colombia’s armed conflict will be re-displaced, re-victimised.

For what are the alternatives for these families? Some have been offered the prospect of returning to new apartments upon completion in 1 or 2 years time. Yet for those of limited resources there will be far fewer, far smaller apartments, for rent in blocks of up to 7 stories. That’s in place of their current houses, with their gardens and patios which they own. And when they are out of their homes, there are few guarantees that these promises will be kept. For the others, the best offer is that of a small rented apartment in a government tower block to the north or south of the city, far from social networks and decent employment opportunities. Or to move elsewhere, to begin building something new, somewhere new.

Yet there is new organisation and with it new hope amongst the communities of La Comuna 8. A new project, initiated by students and academics at the Universidad de Antioquia with the Mesa de Vivienda and Mesa de Desplazados de la Comuna 8, has in recent months met with hundreds of residents and is building a movement with real momentum. Seeking to inform and empower these communities, twice-weekly meetings provide clear information regarding current development plans and their impacts. Rights and legal processes available to residents are explained – with law students from across the city preparing to work with residents to secure the rights to which they are entitled. Finally, communities are consulted on their own neighbourhood vision, their necessities and priorities for their homes – to produce a (genuinely) participatory proposal. For many residents the priority is clear; “we don’t want to go”, “we would rather remain as we are than be forced to leave our home”. Others advocate for the improvement of existing homes, the introduction of new housing in stages so that no more families are forced out until new homes are ready, and the mitigation of risk through land management and improved water channelling, and investment in education and training. This proposal, to be completed and approved by the community in October and November, will be utilised in putting options to and pressure on the incoming municipal administration in late October 2015. The proposal will also be put to the community of La Comuna 8 in a local referendum at the end of November, as momentum for change continues and builds. 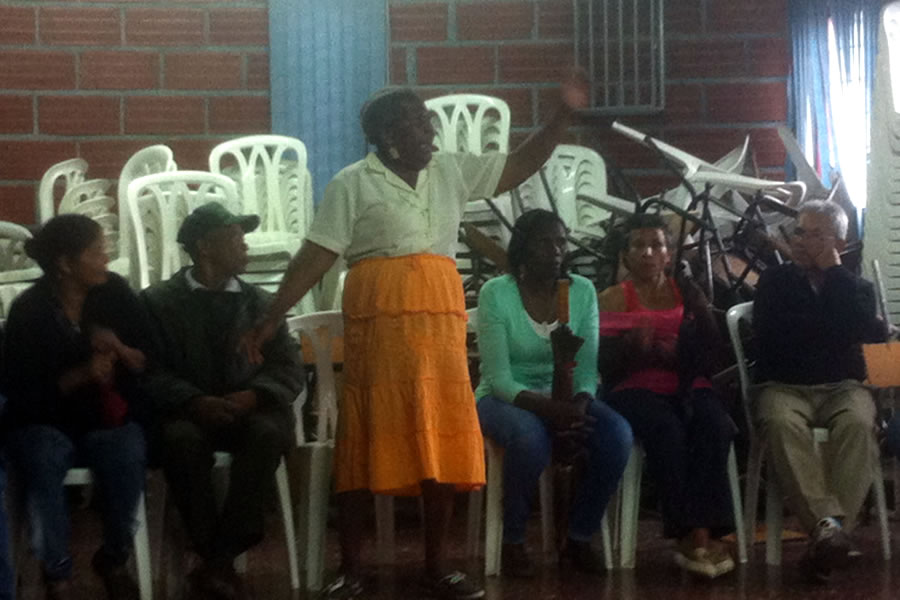 One senior resident of Barrio 13 de Noviembre makes clear her feelings about this this process of ‘desplazamiento’, during a community meeting September ’15

For Medellín, currently investing huge resources in the development of transport infrastructure and the beautification of the city’s river, there is time and space to genuinely listen to and improve the lives of its most vulnerable residents. In the coming weeks the community of La Comuna 8 will offer its own vision for the future. The incoming mayor and city council – and those commentators who see no fault in Medellín’s current renewal – would be wise to take note.